In Pursuit of Justice — the Women Fighting Against Nigeria's Rape Culture

Listen to this story
In the wake of the global #MeToo movement, Nigerian women are sharing their stories and pioneering movements that speak against sexual abuse and harassment.
Words:
Aisha Salaudeen

Kawthar Ahmed is dragging her feet through the busy streets of Mobolaji Bank Anthony in Lagos, Nigeria’s commercial centre. Dressed in a white cardigan and grey sweatpants, the 22-year-old is chanting “What do we want? Justice! When do we want it? Now!” alongside dozens of other protesters.

Ahmed is protesting the alleged rape of celebrity photographer, Busola Dakolo. Dakolo, who is also the wife of popular Nigerian musician Timi Dakolo, in June had accused Biodun Fatoyinbo, lead pastor of one of Nigeria’s pentecostal churches, the Commonwealth of Zion Assembly (COZA) of raping her when she was a teenager.

The allegations, dreadful and detailed, sparked conversations on and off social media about Nigeria’s rape culture. Subsequently, protests in Abuja and Lagos against sexual violations followed.

“It was hurtful to watch the video of Busola Dakolo talking about those things the Coza pastor (Biodun Fatoyinbo) did to her. I felt very angry so when the opportunity to protest against it came, I took it,” Ahmed said. 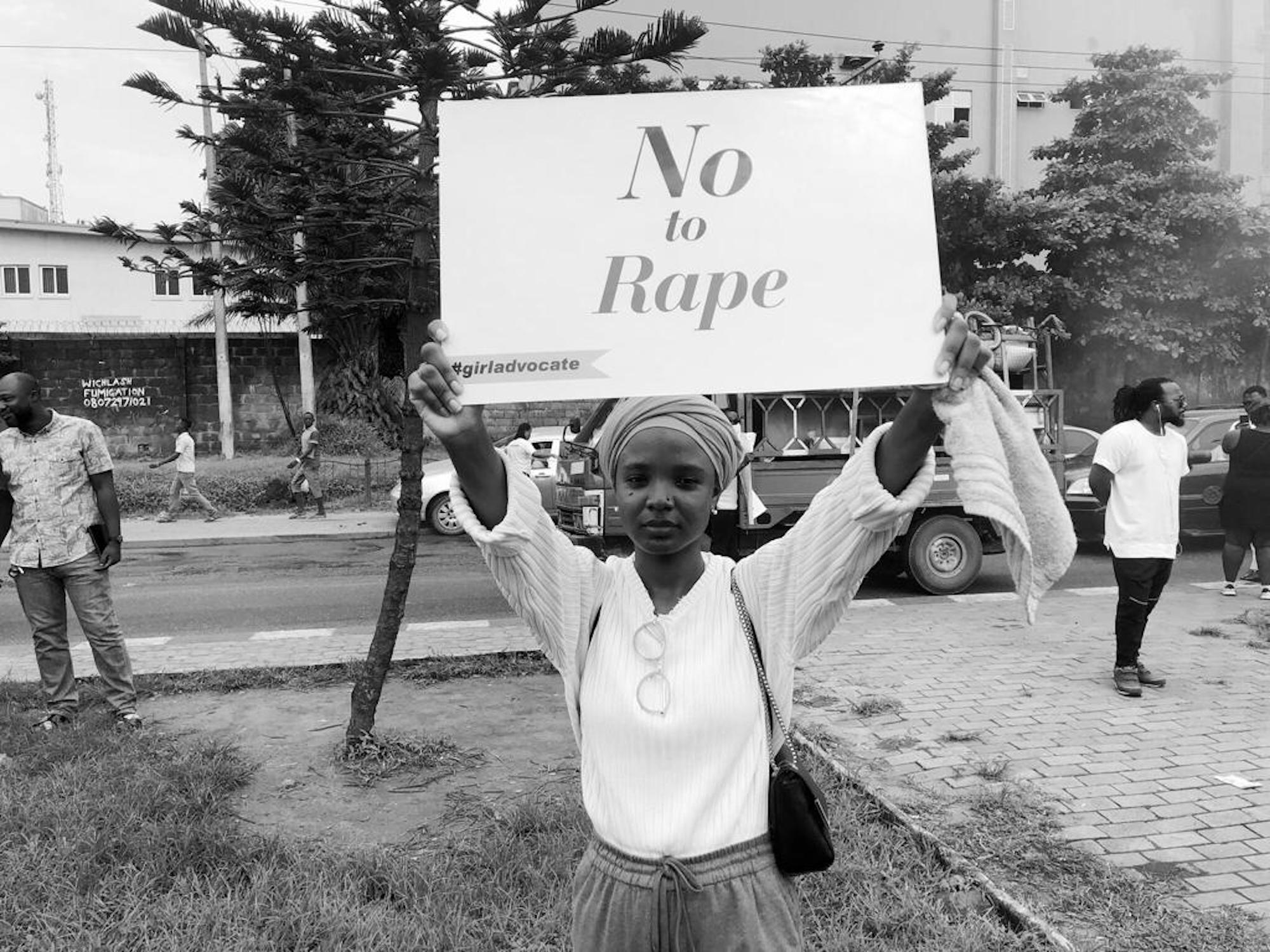 "If you have humanity in you, you will get riled up with injustice in the society regardless of your affiliation to whoever is being denied justice."

Nigeria, where 1 in 4 girls experience sexual violence before the age of 18, widely frowns upon speaking out against sexual abuse and harassment. The country’s deeply patriarchal society, where women’s roles and bodies are controlled by men, normalises sexual abuse — many times blaming the victim and exonerating the perpetrator.

This culture of blaming the victim and trivialising sexual abuse is why many women stay silent about their experiences. According to a national survey carried out in 2014, only 38% of those who experienced sexual violence as children told someone about it, and only about 5% sought help.

But in recent times, and in the wake of the global #MeToo movement, things are slowly taking a different turn. Nigerian women are sharing their stories and pioneering movements that speak against sexual abuse and harassment.

In December 2018, designer, Damilola Marcus under the banner “Market March” started a movement against groping, catcalling and abuse in markets around Nigeria. Marcus and dozens of women took their protest to one of the busiest markets in Lagos, Yaba market, popular for sexual harassment, demanding for women to be treated better while shopping or simply passing by.

The protest led to an online petition, pushing for better enforcement of the law against bullying and harassment in markets. It also trended on social media receiving support for thousands of people - including the wife of Nigeria’s vice president, Dolapo Osinbajo.

Nigeria’s north is arguably the most conservative region in the country and provides a grim environment for women. With high rates of child marriage and a tight political environment believed to be fitting for only men, the region often subjugates the rights of its women.

Maryam Awaisu, 29, is trying to change how Arewa - a collective name for the north of Nigeria - handles cases of sexual violations through the #ArewaMeToo movement. The movement, co-directed by Awaisu is a variation of the global #metoo movement and openly advocates against gender-based violence in the north while helping victims of abuse seek legal and psychosocial help.

Awaisu says she has always been fixated on justice, even as a child. “Working on #ArewaMeToo was about justice. If you have humanity in you, you will get riled up with injustice in the society regardless of your affiliation to whoever is being denied justice,” she said.

Part of why movements like hers are gaining momentum in Nigeria is because of the existence of social media platforms like Twitter and Instagram. Platforms that were created to share pictures and thoughts have now become a space for social movements. Through hashtag activism, consent and abuse have been taught to the country’s large youth population and perpetrators of different forms of abuse have been exposed.

The prevalent occurrence of sexual abuse is a contributing factor to the frequent conversations around it says Awaisu, “It’s happening so often, far greater than reported. So, of course, stories will get out,” she said.

But as women continue to find their voices, they are faced with risks ranging from subtle blackmail to death threats. Kawthar Ahmed who shared bits of how she was almost raped by her boyfriend at the age of 19 on social media received multiple phone calls from strangers and friends asking her to take down her post.

“I got phone calls from people saying I was lying about what happened to me. Others tried to blackmail me into silence by saying I was exposing his (the ex-boyfriend’s) sins and my religion didn’t allow that,” she narrated.

And Maryam Awaisu was arrested at her office in Kaduna, northwest Nigeria by men of Nigeria’s Special Anti Robbery Squad (SARS), a notorious branch of the Nigerian police, after a top aide filed a defamation petition against her for allegedly accusing him of sexual abuse. The arrest was largely to intimidate the Arewa Me Too efforts but according to her, the team is not backing down on the sexual abuse crackdown.

“My life was threatened more than 4 times. I am fine with getting the fire, even if it means they will kill me. I don’t think I will be the first person to be killed,” she told me fiercely.

Nigeria's criminal code, penal code and child's right act all tag rape as a criminal offense punishable by law. However, law enforcement is known for poor handling of reported cases. Many advocates have called for training and enlightenment of law enforcement officers including the police on how to handle rape and sexual harassment cases.

As conversations and protests against sexual violations continue to linger in Nigeria, women like Ahmed and Awaisu are hopeful that this newly unlocked level of awareness will lead to creating structures that curb the menace of abuse in the country.

And with the existence of partner organisations like StandToEndRape, Mirabel Centre and DSVRT, all working towards providing support for survivors of abuse and educating the public on consent, it's possible that Nigeria is slowly edging towards winning the war against sexual violations.

Kawthar Ahmed marches in Lagos, protesting the alleged rape of celebrity photographer, Busola Dakolo.
This is some text inside of a div block.

Aisha Salaudeen is a multimedia journalist based in Lagos, Nigeria. She covers mostly development, human interest and social justice stories. Aisha is passionate about speaking against all forms of violence, she sits on the Stand To End Rape initiative team, a non-profit that focuses on fighting all forms of sexual violence in Nigeria.